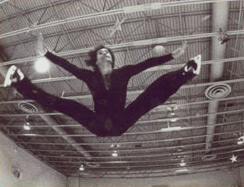 Rosstyn Eduardo Gudiño (President, Executive Director, Star Soloist and Adagio Pair). Born in Caracas, Venezuela. Rosstyn is the first Latino-American ice skater ever to have the honor of participating in a professional championship and to be the owner and founder of “Rosstyn Ice Shows & Rink Designs, Inc.”

He is a natural entertainment on ice, bringing smiles to millions. His charismatic style made him an international star with Holiday On Ice World Tour. His repertoire includes: soloist in Alice Flamenco, Spanish Ice Circus and various appearances on in television. His love for the sport has taken him into designing ice rinks, producing ice shows, choreography, teaching and every aspect of skating, managing and consulting. He is bilingual and holds a degree an Arena/Auditorium Management. 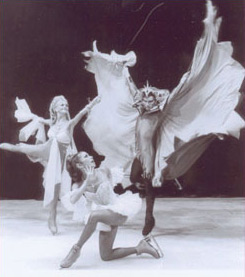 Laurilee Ann Gudiño (Vice-President, Choreographer, Costume Designer, Star Soloist and Adagio Pair Skater) Born in Buffalo, New York. Laurilee is an international star ice skater with Holiday On Ice World Tour and has performed for audiences in Europe, South America, and the Far East. Her repertoire includes: the Adagio pair in the Traviata, Bolero, Mazel-tov & Alice- Flamenco; three years as Princess Aurora in Sleeping Beauty, which combine her theatrical training with her skating talents,making it her favorite role. Laurilee’s unique style of skating, combining dramatic dance with the athletics of ice skating, has always captured the hearts of audiences.

She has now branched into choreography and directing. Laurilee has designed and created all the costumes for Rosstyn Ice Shows and for dozens of competitive and professional ice skaters.